Skip to content
I traveled back to Ambon..!!
This is such a nice new year starter folks, coming home to the place where I was born and surprised by…. how it was as beautiful as ever, yet dazzling landscapes and sparks that werent there when I was 5 is clearly visible now.
It was…. a city of dreams. When you go out to the beach a
t the morning, you will see the blue clear waters in front of you, and the color gets deeper, a shade of green and blue, marking the deep ocean ahead. The area where sun shine falls sparkling like someone’s throwing glistering white shining diamonds everywhere, and you couldnt help but thanking GOD, of what a masterpiece those beaches are. Some of the beaches are coral based, means you cant swim there, but just looking at the color of the waters, breathing the fresh air and feeling the smooth wind playing with your hair, it was a such a sensation.
If ever you play, see, or hear anyone talking about the Final Fantasy X game, there is a place called Besaid Island there. It was a quiet village, with trees and flowers and clear waters with nice beaches an
d white sand, a place you could ONLY IMAGINE in a big city like here, in Jakarta. But in Ambon, I swear it was a reality. The place
was just BEAUTIFUL. 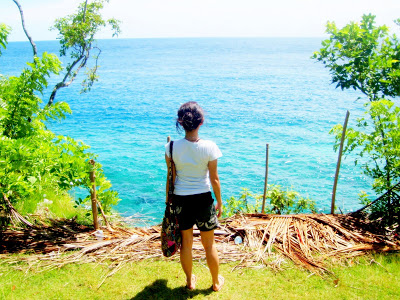 see? I wasnt lying! 😛 😛
you also see a lot of GREEN at Ambon. trees are everywhere. flowers, soft grass, they add to the color of the ocean and make the place evern more outstanding. I dont get it why tourists always dream of Bali even visited the place for like 4 or 5 times. Indonesia got A LOT of beautiful, quiet, nice and unbelievable magical places.
Here you can dream you were a princess of a little country. Your country territory is along the coast line, with forests and beaches. Your people live peacefully quiet, they love the nature too much and has no intention at all even to exploit them to tourist. They value what nature gives them and they took no more then how much they need. You wanted it so bad that tourists would acknowledge your country, but then again, as you stand in a valley filled with grass and look downward to the beautiful shade of blue the ocean gave you, you once again understand what it means to be a happy, peaceful, calm, clean, quiet country. and once again the nature of your country won your heart and even if it means you will be the poorest princess with simple castle by the beach, you will feel thankful, that this is your country, your city of dreams. And you will keep that near with your heart.
You know what folks, place like this forces you to feel thankful.
It brings you to imagine things. It let you relax, like in here, nothing could go wrong. ever.
These two pictures show you the beach of Pintu Kota, or City Gate in English. The beach got its name because the most stunning view from this place is the huge reef that shaped a door or a gate and

separated you from the coast line to the ocean.
You will need to be very careful, because once you missed your step and pass the gate and got yourself into the deep ocean, it will be a sudden death. xD
Here you can dream, you were the daughter of a pirate king. Being a girl, your father never understimate your faith, bravery and skills to conquer the ocean just as he did. But he was worried, for you looked like you don’t belong to the sea. He believed, that a bigger destiny, a harder task and a bigger responsibilities were placed on your shoulder. Witnessing your love to the ocean, ships, sea’s wind and the Ship of Annabelle’s crew, your father cant bring
himself to tell you, that you weren’t belong there.
But that day, everything changed. You asked your father to let you command t
he ship. Your father never did doubt your ultimate skill, but once again, he felt it was just not right. Your father’s crew start begging their captain, to let their princess, their friend, their ‘littl
e girl’ to give them orders. For unlike their captain, the ship’s crew believe with all their heart that you were the Princess of the Sea.
“Aye.”
Your father let you took the command. You gave orders, taking the ship to a place it never sailed before, you have a different style in handling your crew and your ship with your father. After three nights of storms and rain, you found a gate. Strange, there is a hole that looked like a gate in the middle of the ocean. Behind the gate, you could see the white sands with stones and corals everywhere. Trees and flowers, valleys and grass. You saw a LAND! You turned to your father, your eyes sparked with curiosity and interest. But your father looked at you with a confused expression. And you confronted your father, pointing at the island so beautiful that for the first time of you 18 years of life, you are more than willing to leave the Ship of Annabelle for an unknown land 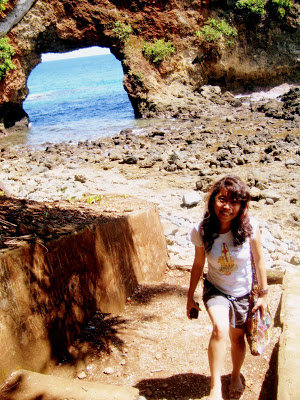 . Your father, and now your crew also looked at you with an even more confused expression.
“But princess, there is no such land over there.”
“I cant see any gate.”
“Gate? What gate?”
“Do I have to throw the anchor?”
“Has princess lost her mind to the storms?”
Your smile fainted slowly and you looked at your father, asking for an explanation. Your father, being a captain and a ship’s crew for his entire life, approached you and put his big hands in your shoulder. Everyone was quiet now.
“I dont lose my mind.”
“I know. You never did belong to the sea.”
Your father then explained his thoughts, for what he’s been keeping for this 18 years. He explained, that he believed you bear a bigger responsibility than being a pirate. seeing what others cant see is just a beginning.
“You have different eyes. different heart. You are not a pirate. But keep in mind, big power comes with big responsibilities. now go. i know you have laid your heart to that invisible land more than you laid your heart to Annabelle.”
so then you set off to the unknown land, swimming through the City Gate.
Oh. crap. I got you all stucked with MY fantasy for too deep. Oh i’m so sorry folks. I just couldnt stop writing them once I began. 😛 😛
Well the photo on your right show you the Pintu Kota reef. It was actually quite right to say that it was like a door to a whole different world. because where I stand on that photo was a dry land, you almost can’t say it was a beach, it was waters with all reef and corals inside. But behind that gate, it was a deep and wide blue ocean with high tides and bright blue sky upward. Again, the place was magnificent and beautiful…
And this is just your MORNING view of the beaches and the city. My grandma’s place was across the city, separated by a bay. from the beach here, you can see the city’s view. and by nigh, it turns to a MAGICAL view. The city looked like a very small mountain with dim lights here and there. You can imagine New York’s night view and Ambon’s view is 20 times more beautiful than New York. This is just the most beautiful bay in the world. The city was framed with a solid black sky where stars are clearly visible. I could spend HOURS just to stare at those cities lights.
Dear folks,
before I got you way too bored reading my sentences, this is my closing line.
put Ambon on your list of travelling, relaxing shelter, holiday destination and refreshing place.
remember her, remember the City of Dreams.
Good night.