Skip to content
Good evening everyone.. :3
I have been SO BUSY more than a queen bee here in Japan. It’s like there will always something i have to do here untill i cant even touch Maximus (my lappy), Cherry (the PSP) or even comic books. Like on Thursday there was a Matsuri (festival) here in Chiba, but untill now i didnt really get the name of the festival. But since it was in the beginning of September, i guess it has to do with welcoming the Aki (autumn) season.
Aki supposed to be beautiful and cool and mild with yellowish leaves falling here and there.. but this stupid global warming makes Aki in Japan feels like you’re in the middle of summer. Saitama district could have like 32 celcius degree! It’s even HOTTER than Jakarta. -______-
Talking about the autumn, this Matsuri (festival) i was talking about was held not very far from the dorm. They had a Jinja (temple), it looks like this: 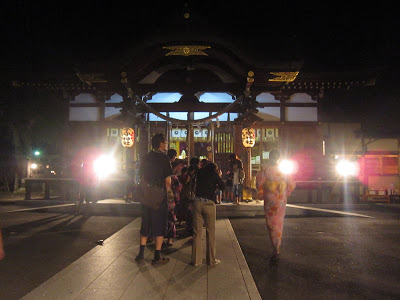 i know it’s not really a clear picture, it is kinda hard to take the picture when there are A LOT of people there and considering they actually came here to pray, i presume it’s kind of rude if i insisted to try to get a good picture. 😀 well at least you get the idea of how the temple looks like.. 😀
in this kind of festival, girls usually wear a Yukata, the traditional, uh, pajamas to go to a festival. it’s quite thin but very long and has this Obi to tie the yukata. there are a lot of colors and motives but usually they are matched with what season you were in and of what occasion you’re going to attend. The boys could use a Jinbe, another, i’m really not sure of
this but i do remember Okaasan (the mother in the dorm) told us that they called casual pajamas. I got a beautiful picture down here for you guys..

That isMarina in her blue yukata, a super funny and crazy girl from Spain. I made a really good friends with her and she is very fun to be with. Next to her is me in pink (yaaaay!!) (i know i look so SMALL almost like a kid,so dont say anything about that xD), it’s Akira senpai next to me, he is wearing the Jinbe. He is a purely and originally made in Japan, but when everyone at first arrived at the dorm, no one believes that. everyone keep telling him that he came from Phillipines or somewhere else and it was kinda amusing seeing him was always like “whaaat? no way, I’m a Japanese!” 😀 and next to her is another crazy head girl in the dorm, Rini. We got so close by this time, thanks God. ^^
In the festival people carrying the small temple on their shoulders and we all follow from behind. what i really love about this festival is there a lot of lampions and they shine very very very beautifully. speaking about shining, when we get out of our dorm’s door, the full moon shines so brightly in the sky, it was very low, i almost thought i could touch it.. it was really one nice beautiful night to go out in a festival.
At the festival there were A LOT of food. Takoyaki, Okonomiyaki, Yakisoba, Yakitori, you name it. they also sell this sweet apple, i think it’s covered with honey, and a 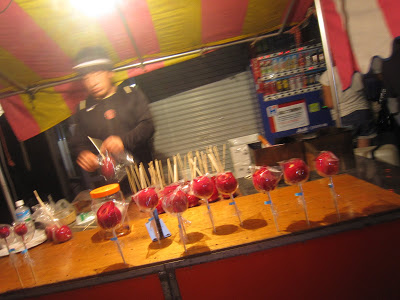 chocolate or strawberry covered bananas with colorful sprinkles, and so many other food. It was really fun to walk with the girls in the dorm and i
was really really really happy.
This is another picture we took at the dorm before we went out and had fun with the festival: 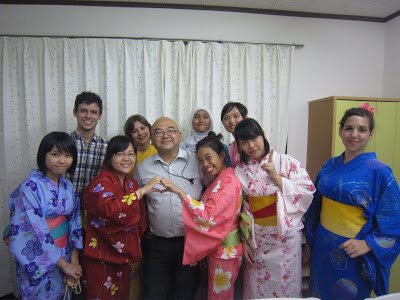 umm… the girl in the soft blue yukata is called Kaori, she is from Vuetnam, next to her is Ranchi.. she also came from Vietnam. The kind faced guy with glasses is my Otousan (father of the dorm) and he is, clearly, married to Okaasan. Next to her is me and next to me is Rini. Marina is the beautiful one in blue..
The guy standing behind Kaori, he was the one with plaid shirt is Leandro, he came from Brazil. He was really nice to me and we had fun here in the dorm. Next to him is Estela, she is one of the marvelous Brazilian girl that went to the same class with me and i spent a lot of time with her and Nayara. I really love them both! 😀 Next to her is Jenn, another Indonesian student, but she wasnt staying with us at the dorm.. and the girl next to her is Kei, she came from Taiwan and her Japanese is really really really good!! 😀 😀
We had a really good time and finally go home, considering it was still a school night and we really had a lot of homeworks (why oh whhhyyyy?? It is week 1!! -______-) so we snapped some pictures and finally went home. I was quite tired but very ver
y happy. That was one magnificent first Matsuri and i only wishe
d i had everyone i love to witness the Matsuri together. 🙂
I’ll try my best to write more and more.
Good night folks.. Kisses from the stars. 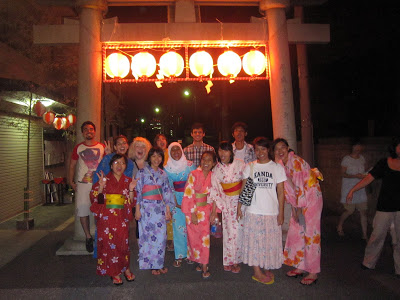