“Welcome, to the Freedom Academy.”

There were 27 of us young people sitting there in that room, quiet as we listen to the greetings from our new homeroom teacher. Honestly for me, I was pretty fascinated.
***
“So you guys are going to Wisma Tempo Sirnagalih. On your own.”
And I looked down at the two white envelopes on my hand. Moses said, inside there are some instructions for us. The envelope with the number two written in it… well it is a special envelope. It is an emergency-kit-kind-of-envelope. I was only allowed to open it on emergency situation, or in case I feel I cant finish the challenge (to reach the destination) before 6 pm, which is very much look like an emergency situation from the committee’s point of view.
It’s a… hunger emergency
heavy rain’s emergency
getting lost…. (clearly an emergency).
Carrying all those heavy luggage out of Immanuel Church’s hall, we were asked to put our suitcases/bags/luggage of all kind inside a van. Considering we’ll be moving with a public transportation we were advised to take only things that will be very important to us and throw everything else to that van. The funny thing was that for everyone, “things that will be very important” has different meanings.
Some was convinced all they need to take with them were some books, some needed to take their cameras, cellphones and wallet, and some, just wanted to take that two white envelopes handed to us minutes earlier.
My mind raced. It was 2 pm, the fastest way would be taking train from the nearest station. But that will only take us to Jakarta’s neighboring city of Bogor. I was pretty convinced that wherever this Wisma Tempo is, it’ll be faraway from the city. A friend tapped me in the shoulder by then. “C’mon. Rianto said we need to take the bus, Kopaja 20 first. We’ll be going to Gondangdia station.”
So we set off together. I thought there was 26 of us, who instantly filled the bus, making the bus assistant smirked at us.

The bus assistant was a young woman, she was small but looked fierce with her dyed hair and cigarettes between her fingers. Long after, I realized that probably she was smirking because the camera crews were following us, (I didn’t know there were camera crews following us!), maybe she thought we were in some kind of reality show.

We got off the bus soon after, where Gondangdia station was just a 5 minute away by foot. We stopped for a while, and I realized that there was a problem with this group I was traveling with. We were too big for a group, all 26 of us, to move at exactly the same time. It is dangerous to cross the street altogether since there was no traffic lights whatsoever and it is hard to keep an eye on each other that way. While we were re-grouping and someone started counting the number of the people that were there I opened my envelope once again and read on:

what.. on earth was that supposed to mean? Hahahaha.. Riddles and guessing is seriously not .
So I stopped thinking about that sentence and started to look around. Some of us came from outside Jakarta, and not everyone are familiar with the Commuter Line Train’s system. Everyone agreed to take the train, so I suggested that we divided the groups in small 5 groups. There were 5 Jakarta’s resident among us and it’ll simplify everything by going in small groups.
By 2.30 pm then we were already aboard the train, speeding to the city of the rain, Bogor. The train was crowded and there were conversations here and there. Everyone was keeping it light and simple, with standard questions of, “What are you studying?” and  “Which university are you attending now?” repeated over and over again. I remember I was talking with many different people in that 1,5 hours journey. My new friends were talking about their city, how the air smells there and what kind of food they eat. One of them even have their own coffee trees in their backyard (*jaw dropped*). I listen and listen and listen and was already starting to form this image in my head about those cities. Like.. I really want to go there too, see the magic with my own eyes. The conversations reminded me once again with the explorer soul in me, the longing feeling to travel and see different places. The images of the hills and the smell of the rain in Padang accompanied my mind until we hit  Bogor station. Instructions on the paper told us to take this bus and that bus and so on. But everyone agreed that we will just rent the bus instead, to simplify everything. By the way about bus, I was talking about this kind of vehicle: 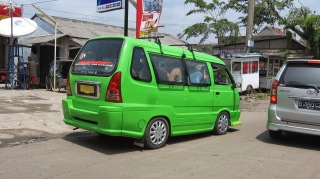 photo taken from here
Well yeah, it is not exactly a bus. We called that one “angkot” here. The sad thing was, this angkot driver actually already had few people onboard. The next thing I know, he was asking his passengers to get off his angkot and advise them to take the other one.
I thought I saw the look of “what the..” flickered across my two new friends, Fikri and May’s faces. I don’t blame them, really.
The road with the rented angkot took longer than we predicted. We took two angkot because there were around 20 of us. The other 7 went ahead and did not travel together with us. That afternoon, the traffic was heavy, it was slightly raining (all the reason why Bogor is called the city of the rain) and our driver chose an alternative road to avoid the traffic. It was so nice of him, saving us the time and the stress, but the alternative road was not an easy road. There were sharp turns, and for some moments it felt like we were hiking a mountain with an angkot.

By 7 pm we finally arrived at Wisma Tempo Sirnagalih, wet, hungry but excited to see what the committee had for us. The one group that traveled by their own hadn’t arrived yet so we sat there, talking, having some coffee and laughed-a lot, until the last group came in by 9 pm. They were caught in the traffic, and their driver chose to stay with the main road so that explained why they arrived so late. I guess our groups’ drivers were more like the risk-taking ones. 😀

When everyone finally was there, we were introduced to Menjadi Indonesia School. As a school of course we have a headmaster, his name is Mr. Andhi K. Yuwono. He is cool. Too cool, waaay to cool to be a hedmaster. The moment I saw him stand in front of the class, I realized I was grinning. He was, probably, around 40. He had glasses with long hair a little bit passed his shoulders, his ears were pierced, he smoke pipes and he stood there in t-shirt and jeans, looking at each of us that night. Suddenly everyone just fell silent, and it was rather an uncomfortable silent. He introduced everyone else, the staff: mbak Etha (the one who e-mailed and called us, the cheerful messenger) and mbak Mitha. Also our homeroom teacher, Mr. Gregorius Tjai, our head of dorm, Moses (the one who handed us our white envelopes earlier) and then the headmaster also introduced us to our mentors for the next two weeks.
At this point I was busy turning my head to the right, to the left and vice versa to see everyone’s faces and to try remembering their names. Everything went okay except the fact that as much as I like my headmaster for being so cool, he wasn’t smiling at all. While I was having a hard time deciding whether he was unhappy or basically expressionless, he asked us something.
“What are you doing here, all of you?” with a super flat tone.

Exactly, exactly a good question, headmaster.
What am I doing here? Having fun? Learning something? Learning something and having fun at the same time?
When I met the other 26 winners I knew right then why they are here. They are very smart, they love writing and most of them are avid, if not obsessive readers. Some of them are a walking library, or a walking history encyclopedia, a lot of them have had their writings published in regional and national newspapers and they are just amazing. As for me, I don’t know why I was given the honor to be there.

“Is there anyone here who opened the second envelope?” the headmaster asked.
Several hands raised and I was quiet.
***
“I’ll open the second envelope!”
“What?? Why? We’re not lost, we’re not in any emergency, we already figured out where the place is.”
“Well, I’ll open it anyway. It’s 6 pm already.”
“We don’t see why you have to open that envelope.”
“Oh, look, there’s some more money inside.”
“What’s inside?”
“Just some money.”
“Oh, that.”
***
“And then the others?” the headmaster asked us. When no one else raised their hands, he continued. “Some hours. Some hours and most of you have already disobey the instruction. Your instruction was clear, open the second envelope in the event of you can’t be here before 6 pm, or when you give up.”
I held my breath, I totally forgot we have that kind of instruction. Was too preoccupied to find our way, I didn’t pay attention on anything else.
“It was not only money in there you guys. We listed our numbers there, you could’ve called us, informed us of where you are. If you guys were in trouble, we can go help or do something.”
The headmaster ended his speech by asking us to be more responsible. And to think again, why we were there, in the hall, as we’re going to start our sessions tomorrow and he doesn’t want us to come empty, knowing nothing. I kinda recalled what one of my lecturer always said to us. “Don’t forget to bring your brain along.”
When the headmaster’s speech was over, the other man, introduced as our homeroom teacher took his place in front of the class. He had rounded face, looked very friendly and had this cheerful aura, despite of a rather dark speech the headmaster had just delivered to us.

“Welcome, to the Freedom Academy.”
Ka Rius looked around at each of us and I stopped staring at him, followed his gaze and looked around. It was rather difficult, reading the faces and expression of the people around me. I didn’t know what bring them here, what their expression were, what they think of Menjadi Indonesia school.

Well, at that time I didn’t know what bring me there either.
I was still questioning, will it be okay.. for me to be here?